Title: The Black Tides of Heaven 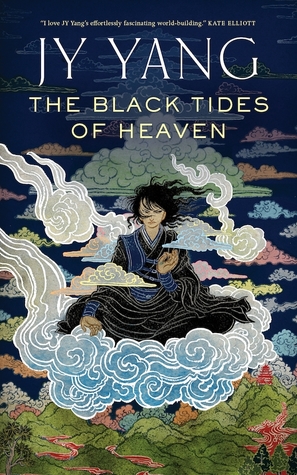 Mokoya and Akeha, the twin children of the Protector, were sold to the Grand Monastery as children. While Mokoya developed her strange prophetic gift, Akeha was always the one who could see the strings that moved adults to action. While his sister received visions of what would be, Akeha realized what could be. What’s more, he saw the sickness at the heart of his mother’s Protectorate.

A rebellion is growing. The Machinists discover new levers to move the world every day, while the Tensors fight to put them down and preserve the power of the state. Unwilling to continue to play a pawn in his mother’s twisted schemes, Akeha leaves the Tensorate behind and falls in with the rebels. But every step Akeha takes towards the Machinists is a step away from his sister Mokoya. Can Akeha find peace without shattering the bond he shares with his twin sister?

He was always made to feel like the spare child (as if children were something to be used) but instead of getting angry with his sister for being chosen he saw how the system was made to oppress them both. He could see past his hurt and that’s a quality we don’t see often. I really liked him

This poor girl was passed around like a hot potato until she was suddenly “useful” and then she was separated from her brother, she’s had a rough childhood and then the ending happens… I can’t wait to get the second novella where we’ll get to see how her story develops

He was a sweetheart, I wish we had gotten more about him.

I think he was my favorite character, the way he dealt with the idea of fate along his faith and how strong his convictions were was amazing to read. I enjoyed the bits and pieces we got of him and would read a full-length novel of just his thoughts.

She’s an interesting character (as all of them are, I feel like I’m repeating myself at this point but they really are), she wanted to become a nun but put her little siblings before her, agreeing to give up her future in exchange of making sure they had a good childhood.

He was a good man, he tried really hard to take good care of the kids and knew that if he left them with their mother it’d be bad, so he agreed to take them in as early as possible and then looked after them in the monastery.

This Bitch, still an interesting character, though. She was smart and ambitious, she had no qualms in sacrificing anything to get where she wanted to be and I can respect that.

The gender system! This is the thing I loved most. In this world every kid is born agender, they use they/them pronouns until they decide otherwise, it’s never too soon or too late to choose and once you do then you are given “Confirmation medicine” to make it stick. I’d only change the fact that they do make them choose at some point and most people are expected to transition if necessary but that can be worked around in-universe.

Sibling love where they don’t stay in touch but would immediately die for each other. How often do we see two characters that loved each other but were pitted against and so started hating each other? Well, in this case it never happens, even if one fo the twins got an apparently perfect life and the other became a fugitive they still wrote letters and loved their sibling with everything they had.

The magic system. This world has an elements-based magic system that can be learned by anyone but only The Protectorate can teach it and so it’s a mark of status. I really like how they posed social issues that are current in a word so completely different to ours, like the access to education, the role of religious organizations and leaders and industrialization.

I know this was a novella and supposed to be short but… it was too shortI wanted to learn so much more like the motivations behind the Protector, how she got into her seat of power, how (if at all) things changed for racial relations after the election of the new abbot, how the machinist worked and where they were getting their supplies,… There was so much more to explore, I feel like this should have been a full novel so that it could properly cover all the questions it proposed.

I don’t care about the fortunes. I care about doing whatever you can, with whatever’s in front of you. Because it’s the only thing you can do.

The Almighty decides our circumstances. He doesn’t decide our actions. It’s what He gave us free will for.

The saying goes, ‘The black tides of heaven direct the courses of human lives.’ To which a wise teacher said, ‘But as with all waters, one can swim against the tide.

6 thoughts on “The Black Tides of Heaven by J. Y. Yang”